Excited to share with you today my review for an extraordinary Romance unlike any you’ve read before! 💕 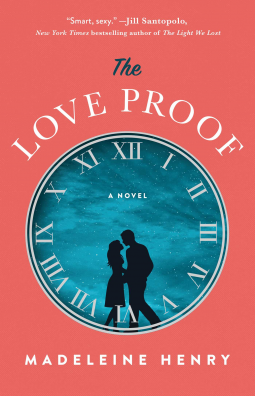 What a book! Madeleine Henry started with a love story, mixed in a generous drop of science, and the result is a Romance like no other. Sophie Jones is brilliant. She spent her childhood voraciously reading and Digesting endless amounts of knowledge. Now she is starting her collegiate career at Yale and studying her prime passion time. When Sophie meets Jake her first week of Yale she is overwhelmed by the power of first love. For the first time in Sophie‘s life there is a distraction to her thirst for knowledge and she’s here for it. That is all you’re getting about the plot, because the true magic of the story is the unexpected direction it takes.

Sophie is such a sympathetic and lovable character. She is quirky, intelligent, insecure, and kind. Her motives were always so pure and true, she did not have a manipulative bone in her body. Jake I am conflicted about. On one hand I think he was a really good person that perhaps got a little caught up in his own ambition. But on the other hand…. there is a lot of science/time theory dropped into the story, but I think it was done in a very accessible way. Admittedly I’m not a big science person and I *think* I understood what was being said. At the heart of the book though this is truly an epic love story. I would have never thought a book with so much science in it would evoke so much emotion. If you are a fan of romance or good storytelling I cannot recommend this book enough.

*** Big thank you to Atria for my gifted copy of this book. All opinions are my own. ***

“Henry has done a masterful job…. This book is academic and heartfelt and tender and loving. It is worth every minute spent reading it.” (Kirkus Reviews, starred review)

A brilliant physicist studying the nature of time embarks on a journey to prove that those we love are always connected to us, leading to surprising revelations in this fresh and unique love story.

Sophie Jones is a physics prodigy on track to unlock the secrets of the universe. But when she meets Jake Kristopher during their first week at Yale, they instantly feel a deep connection, as if they’ve known each other before. Quickly, they become a couple. Slowly, their love lures Sophie away from school.

When a shocking development forces Sophie into a new reality, she returns to physics to make sense of her world. She grapples with life’s big questions, including how to cope with unexpected change and loss. Inspired by her connection with Jake, Sophie throws herself into her studies, determined to prove that true loves belong together in all realities.

Spanning decades, The Love Proof is an unusual love story about lasting connection, time, and intuition. It explores the course that perfect love can take between imperfect people, and urges us to listen to our hearts rather than our heads.

Have a day filled with love and books! XOXO Berit💛 

Photographed in the Writer’s Room

Former TV star Brandi Tyler’s big screen debut crashed and burned amid rumors of an affair with her married co-star… Now, she wants nothing more than to quietly slink away from Hollywood. When she’s offered an opportunity to get out of town and work on a project involving the photographer that launched her career, it seems like the perfect escape! Unfortunately for Brandi, her famous face makes hiding out even a huge city like Houston a little tricky.

When the celebrated photographer’s son offers to let her use his home for privacy, it seems like everything is falling into place. Little does she know that Michael Ames a gorgeous best selling author, and he comes with the package! As Brandi makes her way through old photographs and new scandals, Michael struggles with his next project, and they both fight the growing attraction between them.

Maybe a posse of new girlfriends, some Texas-sized boozy brunches, and a little private time in the writer’s room will help this leading lady find her path back onscreen. And, if she can just picture it, maybe this time she’ll even find love?

Born in Montreal but raised in New England, author Michelle L. E. Price has been writing as long as anyone can remember. An avid reader who was on the verge of losing her mind as a mom to two small children, Michelle began writing her first book, Hidden in the Writer’s Room, as an escape… at least her characters would do exactly what she told them to do and she could always count on a happily ever after ending. She also enjoys wine, re-watching 90’s sitcoms and occasionally running, but heavily relies on writing to stay sane. Michelle is a firm believer that laughter and love are the best parts of life.

What better way to spend a romantic holiday them with a good book???❤️

Escaping from the Shadows

Anastasia Travess is caring, beautiful and talented, but all her life her abusive father has kept her down. Seeking love wherever she can there has only ever been one man she trusts, one man who makes her complete and he rejected her years ago.

Piers Talbot is an enigma, a charming bachelor with only one woman in his heart. But when offered a choice between fixing his estranged family and obtaining his heart’s desire he makes probably the worst decision of his life.

When Anastasia rekindles her past relationship with Piers’ younger brother, the lines between love and loyalty become blurred. Amid danger, betrayal and deception, Anastasia is forced to question everything she thought she knew.

But will Anastasia have the courage to escape from the shadows?

C L Tustin was born and raised in the East Midlands but spent her teenage years in Sydney, Australia. She has sung twice at the Sydney Opera House and also appeared singing live on Australian national television. Returning to the UK in 1989 via Singapore and the Middle East the travel bug has never left her and she has explored countries and cities across the world.

C L Tustin began writing at the age of 11 when she didn’t see why James Bond had to be a man and created a spy code named The Cat with 10 planned adventures. Her first published novel “Escaping from the Shadows” is a romance with an undertone of threat set in the social media free world of 1990. She is currently working on editing and completing her second romance “Desert Rose” whilst writing a brand new story “Flower of Death”. Future projects already planned include two Regency romances and a sci-fi thriller.

Whilst raising her son C L Tustin continued to balance writing and work with completing a BSc(Hons) in Science and a MSc(Merit) in Earth Science with the Open University. This was a most rewarding experience despite the long hours and hard work involved.

This is Anastasia’s first taste of Mark’s real temper and the way he wants to control every aspect of her life, including who she should see and what she should wear. This should have raised many red flags to her, however her need to be loved, to feel wanted overrides her common sense.

Anastasia spent the rest of the day dealing with problems that

had occurred over Christmas. Some of them were incredibly

trivial, but she knew that was why Rick left them for her. At

regular intervals, people popped their heads in to say hello, and

a few wanted to know what had happened between her and

Bryan, whom she deflected with ease. As she left the office, she

was still trying to process what Bryan had told her, hoping very

much that Suzanna was making the right call, but she knew she

needed to see her friend’s face to be the judge of that.

As she got home, she could smell something wonderful

“Hi, baby!” he called out, coming to meet her at the door.

Escaping From The Shadows

She hung up her slightly damp coat and replied, “It was all

right. Plenty of people in to talk to, and lots of ridiculous queries

as usual.” But Mark had already gone back into the kitchen.

She sighed and then prepared to tell him about Bryan and

Suzanna. Hesitant as to where to start, she simply came out with

it. “Bryan came to see me.” As soon as she said his name, Mark

whirled around to face her, ice back in his eyes.

“What did that loser want?”

“He and Suzanna are getting married.”

meet them in the pub on Sunday to celebrate.”

His face took on an ugly expression. “No, we won’t.”

“Why? We’ll be at Guy’s on Saturday, but we’re free Sunday.”

He glared at her.

“I want to see Suzanna. She’s my closest female friend, and

I want to make sure she knows what she’s doing; that she’s

genuinely happy.” Anastasia began to feel her nails digging into

“You’re not going near him because I say so.” His voice was

raised, and she flinched at his expression. He stood inches from

her. “No means no.” And then he turned his back on her to carry

on with dinner as if nothing had happened.

“I’m going to get changed,” she stammered, and she ran from

For the rest of the evening, Mark behaved as if there had been

no disagreement; that he had not shouted at her. Anastasia did not

know what to do, and when he suggested what she should wear

into work the next day, she agreed before she realised it. Anastasia

went to bed first, as Mark wanted to watch a documentary, and,

feeling trapped, she hoped very much to be asleep before he