Excited to share my review with you today for this book that showcased a part of history I was not familiar with. That is the thing I enjoy most about historical fiction learning important things about the past.🌎

Talia Carner has written a raw, heartbreaking, disturbing, and important story. One of the things I like most about historical fiction is it is an engaging and entertaining way to learn about our past. This book spotlights a part of history I was not previously aware of. Thousands of eastern European women at the turn of the 20th century being tricked into moving to South America where they will work as prostitutes anti-Semitism was prevalent in Eastern Europe and these young girls and their families were hopeful for a better life in the Americas. There is no way to paint this desolate situation in a good light, but this book handled it with a loving and gentle hand. This book was not always easy to read, but I believe it is so necessary because human trafficking is still going on. And these girl’s deserve to have their stories told.

Batya and her family are living a life of poverty in Russia. When a stranger approaches offering Batya a Life of riches filled with big mansions and society events The family feels as though this could be their way out. The only thing is that young Batya will move to Argentina on her own and in a couple years at the age of 16 she will marry this man. When Batya arrives in Argentina she realizes all the promises were falls and she finds herself in a life full of beatings, rape, and prostitution. Batya was such a sympathetic character my heart could not help but break for her. She was so strong, so determined, and so angry. I loved the bond she found with the other girls in the house and I admired how she never lost her desire to reunite with her family. She was also extremely resourceful eventually finding love and even becoming a well-known tango dancer. This was such an important story about a determined girl and her relentless fight for a better life.

About The Third Daughter

“In The Third Daughter, Talia Carner ably illuminates a little-known piece of history: the sex trafficking of young women from Russia to South America in the late 19th century. Thoroughly researched and vividly rendered, this is an important and unforgettable story of exploitation and empowerment that will leave you both shaken and inspired.” —Pam Jenoff, New York Times bestselling author of The Lost Girls of Paris

The turn of the 20th century finds fourteen-year-old Batya in the Russian countryside, fleeing with her family endless pogroms. Desperate, her father leaps at the opportunity to marry Batya to a worldly, wealthy stranger who can guarantee his daughter an easy life and passage to America.

Feeling like a princess in a fairytale, Batya leaves her old life behind as she is whisked away to a new world. But soon she discovers that she’s entered a waking nightmare. Her new “husband” does indeed bring her to America: Buenos Aires, a vibrant, growing city in which prostitution is not only legal but deeply embedded in the culture. And now Batya is one of thousands of women tricked and sold into a brothel.

As the years pass, Batya forms deep bonds with her “sisters” in the house as well as some men who are both kind and cruel. Through it all, she holds onto one dream: to bring her family to America, where they will be safe from the anti-Semitism that plagues Russia. Just as Batya is becoming a known tango dancer,  she gets an unexpected but dangerous opportunity—to help bring down the criminal network that has enslaved so many young women and has been instrumental in developing Buenos Aires into   a major metropolis.

A powerful story of finding courage in the face of danger, and hope in the face of despair, The Third Daughter brings to life a dark period of Jewish history and gives a voice to victims whose truth deserves to finally be told. 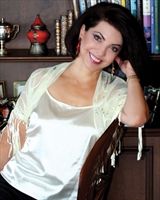 Talia Carner is the former publisher of Savvy Woman magazine and a lecturer at international women’s economic forums. This is her fifth novel.