Today is my youngest kids last day of school! It is the end of his sophomore year and he is now halfway through high school, I cannot even believe it! So this means I get a couple more hours in the morning to read and relax!🎉 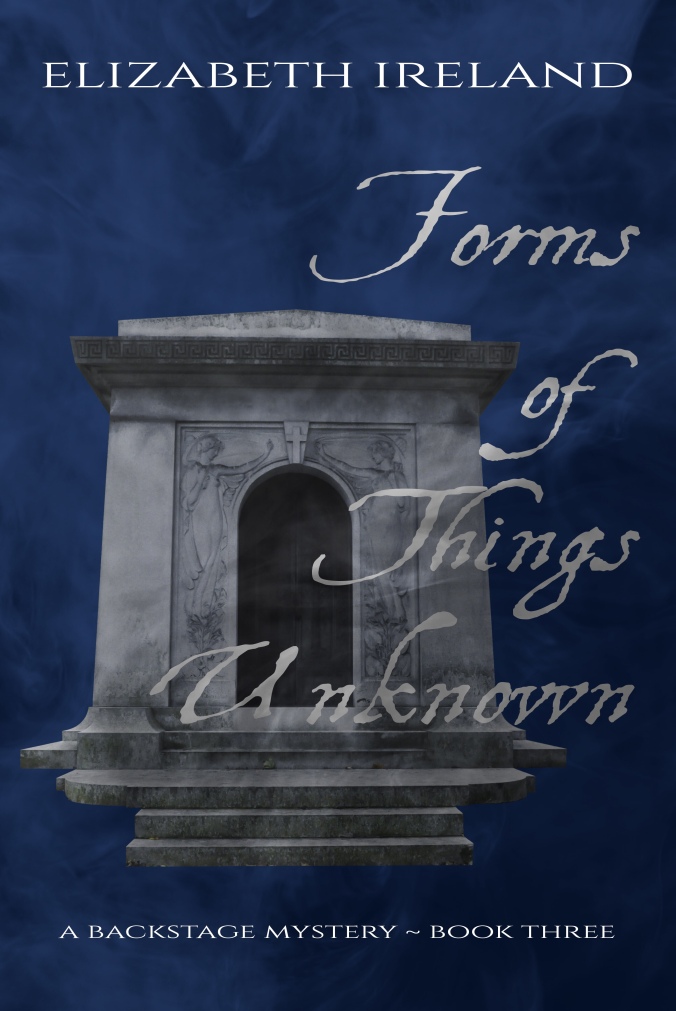 Recently returned to Chicago after a successful tour of Hamlet, Lillian Nolan is awakened in the dead of night by a strange voice. She is shocked to learn that well known and admired actress, Louise Hawthorne, has fallen to her death from the sixth floor of the Tremont House. Was it an accident? Did she jump or was she pushed? Louise’s former lover, and the main suspect, pleads with Lillian to uncover the truth and clear his name.

In the process of learning to trust her intuitive abilities, Lillian attempts to find balance between relying upon her gift and uncovering the truth in her own way. But the menace of death pursues her and soon her own life is at risk. When she finds herself in a trap from which she cannot escape, her only hope of survival is to call upon the metaphysical world.

Forms of Things Unknown is based on an actual event which occurred in June of 1876 in Chicago. It is the third standalone book in the Backstage Mystery Series.

Tagline: Life upon the wicked stage can be deadly.

Set against the backdrop of the Gilded Age, the Backstage Mystery Series stars Lillian Nolan, an unconventional member of Chicago’s upper class who dreams of a career of fortune and fame in the theater. Talented and ambitious, she possesses a hidden skill which she is extremely reluctant to use—the ability to communicate with those who have died and now live in the world of “The Beyond.”

The series chronicles her adventures in which she continually becomes enmeshed in solving mysteries which often require her accessing the realm of the paranormal. Filled with an incredible cast of characters—factual, fictional, and sometimes non-physical—who either help or hinder her quest for the truth, the stories take place during a period considered to be the golden age of both acting and spiritualism in America. 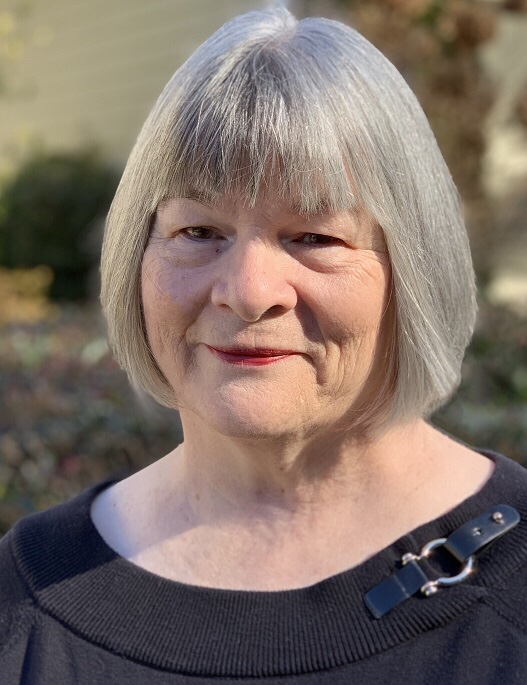 Elizabeth Ireland discovered her passion for theater early. After receiving undergraduate and graduate degrees in Theater, she accepted a teaching position in a vibrant performing arts department at a college in northern Illinois. For ten years, she taught, directed and ran front-of-house operations. American Theater History—particularly that of the 19th century—has always been of particular interest to her.

She has been a quarter-finalist and a semi-finalist for the Don and Gee Nicholl Fellowship in screenwriting sponsored by the Academy of Motion Picture Arts and Sciences. Two of her screenplays have been optioned, but remain unproduced. Her nonfiction work, Women of Vision: Ordinary Women, Extraordinary Lives, was published in 2008. Her work has also been published in a collection of paranormal short stories, Paramourtal: Tales of Undying Love and Loving the Undead. She lives in metro Atlanta with her ever-patient husband, and two quirky dachshunds.

Audio Killed the Bookmark Q & A:

1. Have you ever left any of your books stew for months on end or even a year?

Absolutely. But comes a time when you have to get on with it. Book Four in my series is stewing now and it’s very frustrating. What stewing actually means is that you can’t decide what to do. Writing is all about deciding. You have to actually commit and get on with it. After all, you can change it in another draft.

2. Did you ever think you would be unable to finish your first novel?

LOL! I think no one believes they are actually going to finish their book. When you sit down to begin a work, it is a daunting process. All those blank pages to fill! However, if you just break it down, if you just do it every day, if you take every step, eventually you will have a finished manuscript. You just have to do it, as Anne Lamott says…bird by bird…in her wonderful book Bird By Bird: Some Instructions on Writing and Life.

3. Have you ever incorporated something that happened to you in real life into your novels?

Writing is a very personal process and you have to use the experiences you have had. The key word is “use”. I never take an experience I’ve had and relate it verbatim. Rather, I take that event and think about it and imagine it in different ways that could be relatable to my main character. It might be the basis for a scene or a chapter, but I never write the experience itself.

4. Who are your books mostly dedicated to?

My books are dedicated to the people who have given me support in my life for which I am deeply grateful. These include family, friends, former writing partners and associates. As I am writing a series, I look at it as such a gift to be able to acknowledge them in this way.

5. If given the opportunity to do it all over again, would you change anything in your books?

Of course. Particularly after a book is done I look back and think…I could have put this in or that, I could have re-written this chapter or that section. I think writers continually second guess themselves. If you are constantly re-writing after a project is finished, it keeps you from letting go and moving on to the next. If you are writer, then make the next one better, don’t try to continually go back and refine the last one. If all writers did that, we would have no second books! There’s a movie called Wonder Boys with Michael Douglas who plays a writer who can’t stop working on a particular book. He keeps adding/editing and it’s now 2100 pages long!

6. How hard was it to sit down and actually start writing something?

Any writer knows it’s a challenge. There’s something about that blank piece of paper (or screen) staring back at you that makes you procrastinate. However, it is important to get past that and just put words on paper. It doesn’t matter when you begin whether or not it is any good—and there will be both good and bad. Just begin. One of my favorite quotes is from Goethe: What you can do, or dream you can, begin it; Boldness has genius, power, and magic in it.

Excited to share with you today my review for this lovely story that completely captured my heart! Forgiveness seems to be the theme of the week, because this book was all about forgiveness and family!💕

Patti Callahan Henry has written a beautiful story full of memories, family, and forgiveness. A decade ago Lena was devastatingly betrayed right before she was about to walk down the aisle. Completely destroyed and mortified Lena packs her bags and heads to New York to lick her wounds and start over. Lena gets a job as a travel journalist, traveling the country and the world, but rarely returning home to Water’s End South Carolina. After receiving a phone call from her brother Shane Lena realizes she needs to return home and face her past. Lena’s beloved father Gavin has been diagnosed with early onset Alzheimer’s and it is only a matter of time before he will lose all his memories. What transpires is a lovely story about the struggle to remember and the desire to forget.

This story completely captured my heart. These characters, this family, I was completely invested. Lena’s struggle to face her sister Hallie after 10 years of animosity was heartbreaking and uncomfortable. Some things are hard to forgive and even harder to forget and I am not certain if I would be capable myself. I really felt for Lena and understood her actions. HallieWas a bit of a hypocrite and really frustrated me. And poor Shane was so caught in the middle just trying to keep the peace between his sisters. Loved how the siblings were working together to create a book of memories for their dad, they really wanted to do just about anything to keep his memories alive. Gavin had a big personality and a big heart and it was heartbreaking to see his health and memories deteriorate.

So many pieces to the story that when put together were pure magic. The story was captivating, the setting was stunning, and the characters were authentic. The ending was so touching and it hit me right in the heart! Another remarkable story that you definitely need to add to your summer TVR!

New York Times best-selling author Patti Callahan Henry returns to the beloved Lowcountry setting of The Bookshop at Water’s End with a novel of one woman’s homecoming.
On her wedding day 10 years ago, Lena Donohue experienced a betrayal so painful that she fled the small town of Watersend, South Carolina, and reinvented herself in New York City. Though now a freelance travel writer, the one place she rarely goes is home – until she learns of her dad’s failing health.
Returning to Watersend means seeing the sister she has avoided for a decade and the brother who runs their family’s Irish pub – and who has borne the burden of his sisters’ rift. While Alzheimer’s slowly steals their father’s memories, the siblings rush to preserve his life in stories and photographs. As his secret past brings Lena’s own childhood into focus, it sends her on a journey to discover the true meaning of home….
Praise for The Favorite Daughter
“A satisfying read about family and forgiveness.” (PopSugar)
“Henry’s latest packs an emotional wallop, delving into the bonds and tragedies that make a family…. Readers of thoughtful family dramas will be drawn to the travails of the Donohue clan.” (Booklist)
“Readers will be immersed in this moving tale, hungry to learn whether love and family will overcome betrayal, secrets, and heartache.” (Publishers Weekly)