Happy to share with you today my review for this very intriguing story! Many thanks to Lisa at TLC Book Tours for my invitation to the tour.😊 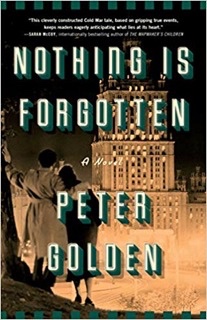 Peter Golden has constructed a highly addictive and compelling read. This was kind of historical fiction meets spy thriller meets mystery meets romance. The writing was eloquent and descriptive. Mr. golden does a wonderful job of bringing the spirit of the cold war to the pages of this book.

This book will take you from New Jersey, to Munich, to Russia, to France, to California, and probably places I have forgotten. The story was fast paced and action packed with a large cast of unique and interesting characters. Michael host a radio show that he broadcasts from his basement, the show is far reaching and can even be heard in Russia. The success of the radio show is mostly due to Michael’s satire of the Russian president, but just as Michael begins to enjoy his notoriety tragedy strikes. Michael’s grandmother is murdered, he cannot figure out why anyone would kill his loving grandmother? Convinced that the murder had something to do with his grandmothers past( a past she rarely discusses) Michael sets off on a quest for the truth. Along the way he meets a woman named Yuli. Yuli Is a disillusioned Russian who dabbles in smuggling. We learned about Emma, Michael’s grandmother along with him, as he researches her past.

I enjoyed unraveling the past as well as the Mystery along with Michael and Yuli. I really liked both of these characters, however I have to say Yuli was one of those feisty fabulous female characters that I absolutely love! I could tell that Peter Golden put a lot of thought and research into this book giving it such an authentic feel. There is a lot of characters, intrigue and action packed into the 352 pages of this book. I’d say this is the perfect book for those who love a little action adventure with their historical fiction, along with a side of romance!

From the beloved author of Comeback Love and Wherever There Is Light, comes “a sweeping tale full of humor and heartbreak” (Karin Tanabe, author of The Diplomat’s Daughter) about the life-changing journey of a young man who travels from New Jersey to Khrushchev’s Russia and the beaches of Southern France to discover long-hidden secrets about his heritage.

In 1950s New Jersey, teacher Michael Daniels—or Misha Danielov to his doting Russian-Jewish grandmother—is at loose ends, until he becomes the host of a nightly underground radio show. Not only does the show become a local hit because of his running satires of USSR leader Nikita Khrushchev, but half a world away, it picks up listeners in a small Soviet city.

There, with rock and roll leaking in through bootlegged airwaves, Yulianna Kosoy—a war orphan in her mid-twenties—is sneaking American goods into the country with her boss, Der Schmuggler.

But just as Michael’s radio show is taking off, his grandmother is murdered. Why would anyone commit such an atrocity against such a warm, affable woman? She had always been secretive about her past and, as Michael discovers, guarded a shadowy ancestral history. In order to solve the mystery of who killed her, Michael sets out for Europe to learn where he—and his grandmother—really came from.

“Both heartbreaking and mesmerizing, Nothing Is Forgotten is the sort of book you won’t soon forget…Cold War Europe, lingering Nazi secrets, and the tragic history faced by millions of families not only bring this tale to life but will keep you turning the pages” (Lisa Wingate, New York Times bestselling author) and will appeal to fans of novels by Anita Diamant and Kristin Hannah.

“Golden draws a vivid portrait of the Cold War era, but it is the complex and unexpected connection between Holocaust survivors and their descendants that turns this book into a page-turner.” (RT Book Reviews)

“Nothing Is Forgotten is a Russian nesting doll of plot twists across continents and decades. This cleverly constructed Cold War tale, based on gripping true events, keeps readers eagerly anticipating what lies at its heart.” (Sarah McCoy, New York Times and international bestselling author of The Mapmaker’s Children)

Have an unforgettable day!💕